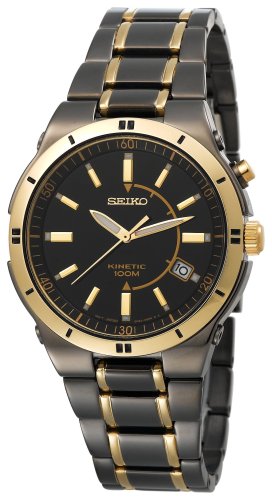 This Men’s watch with Black Ion Finish and gleaming gold tone highlights makes for rich contrast in this Seiko watch. By the simple movement of your wrist, the rechargable battery charges itself. Once fully charged, it captures and stores energy up to six months. Kinetic – the most advanced electronic watch technology. Features in a black dial accented by the gold hands and markers and the power reserve indicator. 100 meters water resistant.

Kinetic: A powerhouse in technological innovation

Like mechanical and quartz, Kinetic is a platform. Over the past 20 years, SEIKO has created on this platform a suite of Kinetic movements, each bringing unique features to the consumer.

It was at the 1986 Basel Fair that SEIKO unveiled its first Kinetic prototype. Introduced under the trial name of 'AGM', it was the first watch in the world to convert kinetic movement into electrical energy. It was the first step in a development that, 20 years later, has made Kinetic synonymous with environmental friendliness, high performance and long-lasting convenience to a generation of users worldwide. From the launch in 1988 of the first commercially available watch (then under the new name AGS) until today, over eight million Kinetic watches have been sold (as of 2007).

In 1998, Kinetic Auto Relay was released, extending the 'at-rest' operating period of the watch to a remarkable 4 years. 1999 saw the launch of the Ultimate Kinetic Chronograph, a masterpiece which fused the very best of SEIKO's mechanical and electronic watch making skills, and in 2003 another Kinetic Chronograph was launched. At Baselworld 2005, the Kinetic Perpetual made its first appearance, combining Kinetic convenience and longevity with a perpetual calendar, correct to the year 2100. In 2007, SEIKO's emotional technology Kinetic Direct Drive is introduced.

Posted by best digital camera at 1:59 AM